N(Ninja) is a flash game where you play a ninja intent on collecting as much
gold as possible. Watch out for all the obstacles and lasers though, one wrong move and you’re ninja toast.
Addictiveness- A D D I C T I N G !
To play – http://sites.google.com/site/rohanthepcwizard/games/play-games/n

There’s a drunken dude who keeps stumbling.You’re mission is to help the dude to reach his home.Move your mouse left or right and keep him up while hiccups,mumbles some drunken gibberish and even bursts into song.I could easily manage 58 meters(ok not easily)without falling.You?Please comment your score.

Addictiveness- A D D I C T I N G !
To play – http://www.freeflashonlinegames.com/play-now/wagen-schenke.html

Shooting an arrow is a little difficult than you had think.Amongst other things,you need to calculate angle and the power used. The game comes in different modes Single player, Two player and Practice

Addictiveness- A D D I C T I N G !
To play – http://sites.google.com/site/rohanthepcwizard/games/play-games/bow-man

→ This is the only level

One of the most addictive game.In this game there is an elephant,things like spikes that can kill you and the objective is very simple which is to get the elephant to the exit.But wait what’s special,once you complete this do you move to a different level ? NO.You play the same level again with an added twist i.e something or the other would’ve changed.Either your controls would get reversed,or the elephant will jump like a pinball,or you would have to move the elephant with mouse,or only one jump will be allowed!

Yetisports has a lot of games,yet my favorites were the Penguin throw and Flamingo drive.Each game has its own tricks to have highscore.

My Highest score in Penguin Drive was 565.3 and in Flamingo drive was 1758.Share your highest score by commenting below.

If you haven’t played this game, you haven’t lived.The idea is pretty simple.You draw a line on a blank canvas,and when you hit play a sledge appears with a snowman riding it.The environment has full physics,so the rider will slow down and speed up according to the incline of the line.I was surprised when I saw some awesome videos of Line Rider on YouTube.You can even have some spectacularly violent crashes and even behead the snowman with a strategically placed line.

Addictiveness- A D D I C T I N G !
To play – http://lineriderfun.com/line_rider.html

The aim of the game is to keep your helicopter away from touching the edges, simply by holding left-click to go up and letting go to drop. It might sound easy, but racking up a high score is a challenge.I am sure you will play it again and again to beat your own score.My highest was 839 and yours?

In Karoshi the goal is to kill yourself.Yes,yourself. The story is about a salaryman who is frustrated with his boring desk job.The game follows a puzzle format where the implements for killing yourself such as spikes and solid steel safes.So you will have to use you brains a little (maybe more than little).If you succeed you can see the guy explode in an unnaturally large amount of blood.
Addictiveness- A D D I C T I N G !
To play –  http://www.newgrounds.com/portal/view/462774

Based on Valve’s mind-bending Orange Box puzzler Portal, this platformer is a testament to the potential of the flash game.Test your wits with the portal gun that lets you teleport to a different location.You’re a test subject and have to solve puzzle like scenarios to escape from room to room using your portal gun.

Addictiveness- A D D I C T I N G !
To play –  http://portal.wecreatestuff.com/portal.php 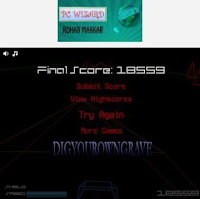 Those harsh 80s arcade sounds and a faced paced 3D environment.It’ll remind you of SkyRoads from old years except in this game you’re a cube and you cannot jump.Dodge badly crafted wireframe obstacles collect bonus points.A fun way to time warp a couple of hours.
My highest score was 18,559.Share your score by commenting below…

Addictiveness- A D D I C T I N G !
To play – http://sites.google.com/site/rohanthepcwizard/games/play-games/Vector-Runner

3 thoughts on “10 Most Addicting Online Games”