Are you afraid of purchasing a touchscreen smartphone and instead become one of the BlackBerry Boyz, just because you type a lot of mails and messages. Here are some of the apps that will not only increase your speed but also improve your typing experience. 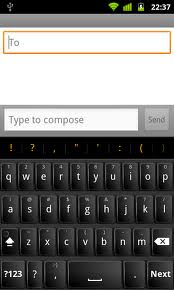 One of the most popular app on the Android Market.On the surface, it is simply a bigger keyboard that gives you larger keys, but on the negative side, hogs more screen space than the default keyboard on your Android.
You can also customize its appearance.Search the market and you will see literally dozens of skins and themes that transform its appearance, adding functions and tweaks that makes it one of the  most customizable keyboard on a mobile touchscreen device. You can even have an iPhone like keyboard on your Android device by using it with the right skin. Go for it if want a bigger keyboard or just want your keys to look different.

Yes, we all know that iPhone(include iPod also) has better onscreen keyboards  as compared to all the other devices but still some people find it little small and one cannot replace the keyboard of iOS device without jailbreaking(or hacking) it. However, if you just want a keyboard with bigger keys without getting into jailbreaking, you can use Keyboard+. It will not replace your conventional keyboard, but will appear on your device as an app. You can use it for text messaging, mail, Facebook and Twitter posts and for Web searches, but not on all apps on your device. But if you get addicted to it, you can type text using it and paste it in other apps. It can be a little bit clumsy but it’s helpful, especially if you have large fingers.

The most popular alternative keyboard and even comes preinstalled in many android devices. Swype allows you to just slide your finger across the letters you wish to type and the word for typing, instead of lifting and tapping each letter in turn. If you miss on a letter or swyped wrong letter, it automatically predicts the correct word and if it couldn’t it generates a list of suggestions for that very word  It changes typing from a tapping to a gliding experience. It includes great features like automatic spacing and spelling correction, but getting familiar with it will take time.Works with Android and Symbian^3

SlideIT works on the similar run-your-finger-over-theletters-to-form-a-word concept as Swype but the good thing is that it also lets you mix typing and sliding together. Moreover, it has a better word predictive ablity than. It suports Android, Symbian and even Windows Mobile.

It looks pretty much like a conventional onscreen keyboard, but what really marks it out is the fact that it gets in sync with your mail, messaging and social network accounts to get familiar with your type of writing and the words you are likely to use. But once it gets going, it actually works as you will see the keyboard accurately predicting words that you use from time to time, even if they do not exist in a conventional dictionary. Perfect if you are the type that uses unorthodox words or keeps referring to people in their texts- SwiftKey will predict those terms and names.Get it from – www.swiftkey.net