Want a cheap Android Tablet and not satisfied with Aakash(Ubislate 7+, commercial version), then maybe Wishtel has the device that you are looking for.

Wishtel India has launched two tablets in the Indian market, ‘Ira’ and ‘Ira Thing’. The specifications of both the budget tablets are almost same, the main difference is that Ira Thing has a resistive touchscreen and Ira has a capacitive touchscreen. Another difference is that the Ira Thing has a 2200mAh battery whereas the Ira has a 2800 mAh(because of better screen display). Apart from Android, customers will have the option of using Linux Sugar OS on the tablet.

“By enabling support for Indian languages, we’re providing the opportunity for hundreds of millions of Indians to join the tablet revolution that is sweeping the globe today. We also hope to reach out to those brilliant minds in India that are inhibited for the lack of proper resources.”said, Milind Shah, CEO, Wishtel. 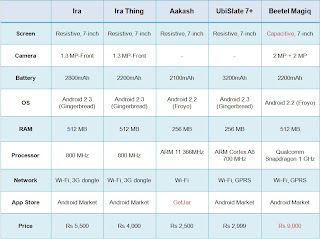 All the compared tablets have same resolution i.e 480×800 pixels.

♦ IRA is the world’s first tablet with support for Indian languages.
♦ Both Ira and Ira Thing has 4 GB inbuilt storage expandable to 32 GB via microSD.

♦ You don’t have access to Android Market in Aakash tab.

♦ Aakash 2 is scheduled to be launched in May.